Investing is like water, but what the hell is water?

By Graham Hand. on behalf of Firstlinks
July 2021

David Foster Wallace was a brilliant American writer and satirist. In a commencement speech to Kenyon College graduates in 2005, he gave a parable about the difficulties of daily life:

There are these two young fish swimming along, and they happen to meet an older fish swimming the other way who nods at them and says, ‘Morning, boys, how’s the water?’

And the two young fish swim on for a bit and then eventually one of them looks over at the other and goes, ‘What the hell is water?’

… The point of the fish story is merely that the most obvious, important realities are often the ones that are the hardest to see and talk about … A huge percentage of the stuff that I tend to be automatically certain of is, it turns out, totally wrong and deluded.

Although Wallace did not specifically speak about investing, it is equally applicable in 2021. The traditional fundamental investment analysis, such as taught to the high levels of a CFA, or Chartered Financial Analyst, uses many ways to value a company based on metrics. These include Price to Earnings (P/E) ratios, Return on Equity, Price to Book (P/B), dividend payouts, market beta, and on it goes. Combined, they help an analyst to derive an intrinsic value of a company which can be compared with the current share price.

What’s the relevance of Wallace and his fish?

We are now investing with increasing disconnects between this fundamental analysis and what some players, young and old, are willing to pay for a wide range of assets. More than ever, even in the dotcom boom, we have some fish saying the water is obvious, like the intrinsic value of a company. And we have other fish who not only ignore these traditional metrics, they are not even in the same fish tank.

To become a CFA requires years of work and a recommended 300 hours of study per exam level. An alternative way to invest (or trade) is to follow someone who was the world’s richest man a few months ago:

Memes are treading on thin ice and will go to water

The best examples of the excesses are ‘meme stocks’. Even the people who buy them struggle with a definition. Apparently, you recognise them when you see them, or ‘they just are’. Urban Dictionary goes with this definition:

Any publicly-traded company stock that keeps going up and disregards the fundamentals such as revenue and profits when valuing the underlying company … Due to hype around the company and its future outlook, the price of their stock keeps going up beyond a point that makes logical sense which may or may not result in a steep drop later on once/if the hype dies down.

The prices are often driven by platforms such as Reddit, TikTok and Robinhood, in a social media barrage of self-reinforcing chat. If a stock is $10 today and everyone is talking about it, then it will probably be worth $15 tomorrow and $20 or $100 in a week. The best example is GameStop in the US which went from US$20 to almost US$500 in a month at the start of 2021. The surge had nothing whatsoever to do with the company’s ‘value’. On social media, young fish boasted of their rapid money-making and their friends drowned their FOMO by piling in. The miracle turned water to wine.

Investors should not buy into the meme mania. It should be contained within the realm of day-traders who are willing to speculate on momentum. Part of the reason Meme stocks such as these have arisen in the first place is FOMO, or Fear of Missing Out, which is fuelled by too many people touting about how much money they are making on these trades. These situations are not what we consider to be an investment but are short-term momentum trades, meaning that the stocks are not moving due to changes in the underlying fundamental value of the company but are based on technical indicators. These situations often start with a short squeeze, and then turn into a self-fulfilling prophecy in the short run on the way up. But once the upward momentum runs out and stocks start to turn down. Look out below – traders will look to exit positions as quickly as possible and will hit any and all bids on the way down until they are out of their positions.

Another example is cryptocurrency. It’s almost impossible to keep count of the daily increase in the number of coins and tokens as it is easy to create a new one. There are at least 6,000 with some estimates as high as 10,000. The top 20 comprise about 90% of the market, so most will crash and burn worthless. Outside of leaders Bitcoin and Ethereum, the best known is Dogecoin (the Doge reference in the Musk tweet above) which started as a meme-inspired joke in 2013. In the planned float of popular ‘free’ trading platform Robinhood, its initial documents reveal that 34% of its cryptocurrency-based revenue was due to Dogecoin transactions compared to only 4% in the previous quarter.

With retail investors piling into new coins, and no doubt heavily supporting the IPO of Robinhood, the whole edifice is testing who knows about water. Even for Bitcoin, governments are cracking down on the massive use of electricity to mine new coins, especially in China where warehouses full of computers have been forced to close.

Number of cryptocurrencies worldwide 2013 to July 2021 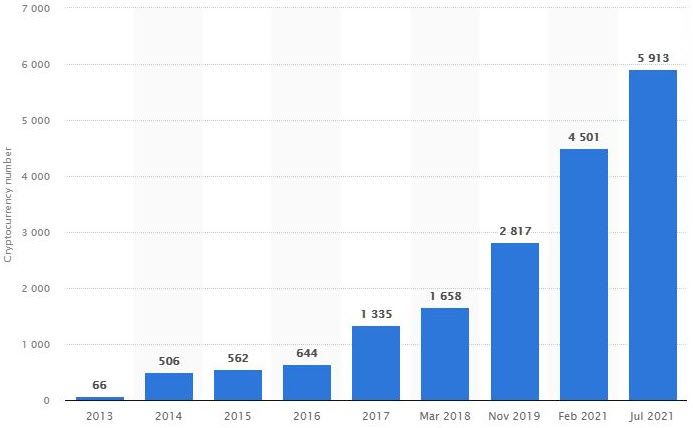 The Amazon is the world’s largest river by volume

Of course, for every thousand crazy valuations that turn to dust, there is one that is pure liquid gold. That is why many hair-brained ideas are backed by investors. Get one right and it can pay for a lot of mistakes.

Amazon (the company, not the river) started as one of the earliest and biggest bets on the internet. For many years, analysts criticised its business model, with Jeff Bezos firmly placing growth and customer service ahead of profit. Brad Stone’s book, Jeff Bezos and The Age of Amazon (2013) chronicles that despite the rapid growth in sales, Amazon lost around US$1 billion in the dotcom period in 2000 and barely avoided insolvency. Bezos is now the world’s richest man worth around US$200 billion, having finally stepped aside as CEO last week at the age of 57.

As the chart below from The Economist shows, profit meant little to him, a remarkable departure from the traditional emphasis on the purpose of business. Bezos might well say “What the hell is profit!”, much to the chagrin of most of Wall Street. Amazon’s P/E is currently about 70 which a fundamental analyst would call bubble-territory expensive, and it’s at an all-time high and up 100% since March 2020. Everyone is looking for the next Amazon, and access to capital for startups has never been easier. This has no parallels in history, and as The Economist says:

… something astonishing is going on in fintech. Much more money is pouring into it than usual. In the second quarter of the year alone it attracted $34bn in venture-capital funding, a record, reckons CB Insights.

That’s AUD45,000,000,000 in three months, just for fintech startups. It’s no wonder older companies are facing unprecedented tech disruption. Business has never seen so much capital available to so many smart people.

Goldman Sachs produces an index of listed US tech companies which are not making a profit. The chart below (from Bianco Research) shows how this index remained flat for the period 2014 to sometime in 2020. As companies benefitted from a quick adoption of tech during COVID, the index reached a peak of 433 on 12 February 2021. It has since fallen to the current level of 328 which some might call a reality check, but who knows when to calculate a P/E, you need an E, and none of these companies have one. Responsibility for these excesses go right to the top of policy making. US stimulus shows few signs of easing, with massive infrastructure spending coming. The US central bank, the Federal Reserve, now buys all net Treasury issuance and owns 25% of all US Government bonds. The yield on US Treasuries is no longer a market rate as it is effectively set by the Fed. It’s hard to see a turning point as it will be many years before governments feel the need for fiscal restraint at the risk of losses in jobs and votes. There is no incentive now they realise there is indeed an unlimited water well.

And here are two charts showing the extraordinary impact. For the first time ever, the return on high-yield bonds (previously called junk bonds) is less than the inflation rate in the US. Admittedly, inflation is artificially high due to falls a year ago and some (hopefully) short-term supply problems, but it was only a year ago at the height of COVID that the margin was 10%. While this margin will return to a small positive soon, the record low interest rates are encouraging companies to borrow. The ratio of US corporate debt to GDP is at an all-time high. Central banks are stimulating economies and companies are borrowing, but history suggests that after similar peaks in credit, sharemarkets have struggled.

There have always been cycles of extremes

Of course, there is nothing new about cycles and excesses. John-Paul Rodrigue famously produced the following chart on the phases of an economic bubble. The ‘smart money’ gets in early, and by the time the public is in full swing, greed and delusion take over. At the peak, ‘This Time is Different’ in the ‘New Paradigm’. Many assets such as Non Fungible Tokens (NFTs) have surpassed even where Rodrigue thought his chart should go. After fear, capitulation and despair, markets return to the mean. How should investors react?

Unable to resist a Warren Buffett quote, he said, “Investing is easy but not simple.” Indeed. There are at least as many people who believe the FAANG stocks are seriously overvalued as there are others who think they are the greatest companies in history at value prices.

Let’s return to Wallace and his speech to students:

If you’re worried that I plan to present myself here as the wise older fish explaining what water is to you younger fish, please don’t be. I am not the wise old fish.

Maybe for many assets, the young fish are right. What the hell is water? Who cares if it took Amazon 20 years to make a profit? Companies in the Goldman Sachs index include Spotify, Shopify and Pinterest. Spotify is redefining how we listen to music, so who’s to say what it will be worth in five years? The young fish swim on, leaping on every word from Elon Musk as if he were The Messiah.

While the water may be different in some ways, it is still there, such as:

We don’t know if hell freezes over and we can’t put a date on any of these events, but instead of fishing around in someone else’s pool, we should prepare our own portfolios for the inevitable.