I can honestly say this trip was everything I expected it would be, very challenging and a once in a lifetime experience! Something I wasn’t ready for was what I was to learn about Tibet, the Tibetan people, and the Chinese influence since the 1959 Cultural Revolution. It’s hard not to come away after visiting Tibet without some strong feelings about what China is doing to the Tibetan culture. One of the first things I did on returning to Kathmandu in Nepal was to buy a ‘Free Tibet’ t-shirt, they really are prisoners in their own country.

For me, the highlight absolutely was achieving my dream of riding into Everest Base Camp. The morning we rode in was a beautiful clear day with Mt Everest in full view all the way in….words simply cannot describe the sight or the experience. Symbolically I raised my bike above my head to signify the achievement. Base Camp is 5200 mts and Mt Everest 8800 mts, so up that close it is a really awesome sight. One of the guys on the trip has actually climbed Mt Everest and on arriving at Base Camp he said to us he considered the ride there to be as hard as the climb to the top, so that gave us some perspective that what we had achieved was pretty amazing. The main issue, apart from the very thin air, was the many hours of climbing and riding over the rough corrugated gravel road. It wasn’t just a physical thing but also required the mental will to push on.

Another highlight was visiting the Potala Palace in Lhasa, the capital of Tibet. This structure dates back to the 7th century and was the traditional home of the Dalai Lama. During the 1959 Cultural Revolution, the Chinese destroyed many of the monasteries in Tibet. The Potala Palace itself received heavy artillery for about 3 days but thankfully the structure was strong enough to withstand the bombing. Today, it still remains an imposing sight high above Lhasa. The tombs of 9 Dalai Lama are housed in separate temples inside and walls are lined metres high with Scriptures hand written by the Monks over the centuries. It’s a really inspiring place to visit and to imagine the amount of work and dedication these people had to build such a structure. The tomb of the 9th Dalai Lama stands 12 mts tall and we estimated in excess of $132 million of gold decorated this monument alone.

The landscape in Tibet is surprisingly dry and barren. The Himalayas create such a rain shadow that very little vegetation exists, so the ground is quite bare with no trees and is very rocky. Even at 4500 – 5000 mts altitude there was no snow. On the last day’s ride we descended very quickly 3000 mts from Nyalam in Tibet down to the Nepalese border at Kodari. It had rained all night and was still sprinkling as we rode which made for a spectacular ride down through the gorge, with waterfalls cascading down all around us from above, and raging rivers deep below us. The vegetation turned to rainforest and it was just an amazing sight.

This trip was incredible and I’m so glad I persisted and made it happen. The Oncology Children’s Foundation is an impressive organisation doing some great things towards children’s cancer research. I can assure you the money donated by Fitzpatricks and others to help make this trip a reality has been well spent (and well earned!).

Ready to start the journey 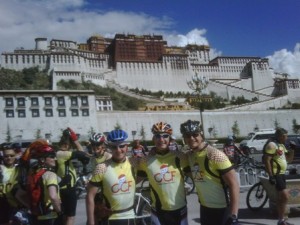 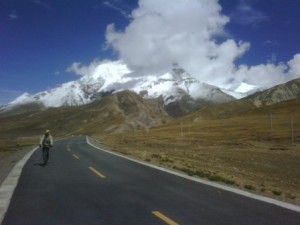 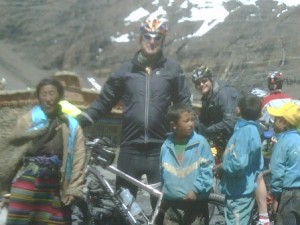 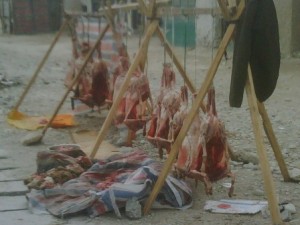 Made it for the kids 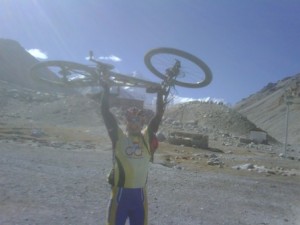