When will I retire? Economic impact of an ageing population

By Asaf Cohen and Terry Rawnsley, on behalf of Firstlinks
May 2022

Meeting the changing needs of older people in terms of housing, support services and work arrangements is a significant challenge facing Australia.

Demographers, economists and policy makers are increasingly concerned about the ageing population and the increasing number of people aged over 45 who will start to transition into retirement over the next 20 years. In 2021, 39% of the labour force was aged over 45-years-old, compared to 32% in 2001. Over the next 20 years, an increasing number of people will start to transition into retirement.

Intergenerational reports prepared for the Commonwealth and State Governments highlight the challenges of an ageing population, including significant impacts on the labour force, consumption patterns, public finances and – in turn – economic growth.

Comparing the major Australian cities (based on the greater capital city statistical area), people in the larger cities of Sydney and Melbourne tend retire earlier than their counterparts in Brisbane Perth and Adelaide. This may be driven by the relative cost of living in Sydney and Melbourne, which encourages older people to shift out of the city as they age to a lower-cost regional area.

By combining life expectancy data with the expected age of retirement, an expected ‘length of retirement’ can be estimated. The length of retirement has implications for individuals as they manage their personal finances, the aged care sector, and for the government in terms of transfer payments and healthcare costs.

Based on analysis of an age of retirement dataset prepared by KPMG Australia, the ‘When will I retire’ paper considers: 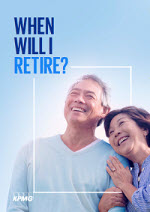 Our latest thought leadership paper When will I retire? explores the implications and opportunities of the changing retirement landscape.